Every fighter dreams of stepping into the UFC octagon and every UFC fighter hopes to take home a big time bonus for a spectacular finish.  Precision MMA coach Brian McLaughlin got to be part of just such an occurrence when he journeyed from Poughkeepsie, NY to Atlantic City to corner Dan Miller at the UFC on FX. Miller enlisted the help of the Hudson Valley coach as he prepared to face BJJ black Belt Ricardo Funch.  For previous fights Brian had helped Dan’s younger brother Jim Miller prepare for battle inside the octagon, but this would be his first time in Dan’s corner.

From day 1 the focus of the training camp was getting the submission.  After reviewing tape on Funch, Brian saw a few weaknesses Dan could exploit.  The biggest being an opening for a guillotine choke.  For weeks Dan drilled the entries knowing that it would be his key to victory.

After 2 hard fought rounds the opportunity presented itself and Dan latched onto the choke at 3:12 of the final round and forced the submission.  In his post fight speech he said, “My coach Brian said the guillotine was there and I took it”. 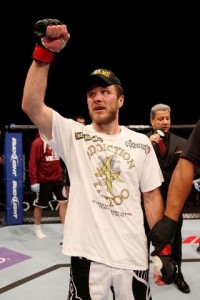 Dan Miller with the victory

The incredible submission did not go unnoticed by the UFC brass.  Dan was awarded $50,000 for Submission of the Night, making the victory all the more sweet.

These same moves Brian is teaching to elite UFC fighters can be learned in the Hudson Valley at Precision MMA. No other MMA Gym in Poughkeepsie has produced UFC results like Precision MMA.  To start training with Brian McLaughlin and the other great coaches at Precision MMA call 845-392-8495 or visit www.poughkeepsiemixedmartialarts.com and get started on your 30 FREE days of training.