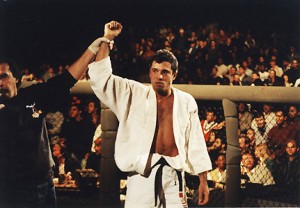 Since the first Ultimate Fighting Championship in 1993, the sport of Mixed Martial Arts has gone through numerous changes in terms of both rules and mainstream acceptance. Originally, what is now known as MMA was actually a different sport in its structure. In the early days it was known as “Vale Tudo”, which translated from Portuguese means “anything goes”, or otherwise referred to simply as “No Holds Barred fights”. In 2001 however, the New Jersey State Athletic Control Board was the first to adopt a new rule set called the “Unified Rules”. The majority of the United States, including the Hudson Valley region of New York, and the rest of the world quickly adopted these rules. As such, they are now generally accepted as the main set of regulations for the sport and the move that defined the birth of MMA and the death of Vale Tudo. With the transition from Vale Tudo to Mixed Martial Arts more changed than just the rules. The general audience for the sport grew and changed along with the styles of the fighters, extending to the Hudson Valley and well beyond. Once less of a sport and more of a spectacle, with no weight classes, few rules and very little rhyme or reason behind who was permitted to fight in the events, after the inception of the Unified Rules MMA became a very organized athletic competition. Specific weight classes were created to avoid mismatches, and very clear boundaries were set between what was and wasn’t legal. As the rules became clearer, likewise, the strategies for the fighters competing became more honed and Mixed Martial Arts coaches seeking to prepare their fighters for competition discarded what was useless, and zeroed in on what was effective. Competition teams that focused too much on one aspect of MMA and not enough on the others began to fall out of favor as their members were less successful, and the successful teams provided a formula for others to follow. While the strategies for the camps differed, one factor was consistent amongst most: in general, most successful teams, such as Precision MMA in Hudson Valley, New York, had one or more coaches who had at one point fought in Professional Mixed Martial Arts fights themselves. This remains to be the case these days, as MMA fighters need coaches who have also set foot in the ring to clarify details that might be overlooked by instructors lacking this experience.

Despite the massive differences in the rule set at the time, when Royce Gracie fought in the first UFCs in the early 90s, he didn’t go out there knowing what to expect based only on his own past experiences. Royce fought with his father Helio and his brothers Rickson and Rorion in his corner, all of whom had fought professionally themselves. Though Royce outmatched most of his opponents, he found his first real challenge when faced with 265lbs wrestler Dan Severn in the main event of UFC 4. If you look back at that old footage you can clearly see moments when Royce is looking to his corner for advice. Royce went on to win the fight, but without his corner this may not have been the case. A good corner man, like those provided by Precision in the Hudson Valley, is essential in MMA and experience in the ring is the most important credential any corner man or instructor can have. There are many reasons for this that we will look at in detail.

First and foremost, Mixed Martial Arts is a very chaotic sport. Even with the modern Unified Rules, the possibilities for what can occur in the ring are nearly endless and fighters risk very real bodily injury every time they compete. Anything that can make the sport less chaotic is a plus, and the antidote to chaos is experience. Even if someone cannot relate to an experience themselves, they should at the very least have an advisor who can. At Precision Mixed Martial Arts in Hudson Valley, New York, students are extremely lucky to have an instructor who has been in the ring himself in Brian McLaughlin. Boasting a record of 6-2 and having fought on the Ultimate Fighter Season Eight, Brian is able to coach his students from a unique vantage point. The Hudson Valley’s McLaughlin has faced just about every adversity in the ring and can explain details that a coach who has not fought would overlook. Sure, any MMA coach can tell his student that as a modern day fighter he will need to be proficient in the standup, wrestling and ground portions of the game. However, only former fighters like Brian can tell you what it is like to fight with an injured hand or with bronchitis. Only a former fighter will be able to tell his students to avoid shooting on the logos of the mat surface in the cage, because these surfaces are much more abrasive than the rest of the mat and will tear the skin of one’s knees. These are just a few details that Precision in the Hudson Valley’s MMA coach can impart to his aspiring fighters.

Many Hudson Valley MMA camps are organized mainly around one discipline as their base. For some schools the instructor has a striking background and has competitively taken part in boxing and kickboxing fights. Others come from a wrestling background and others from a Brazilian Jiu-Jitsu base. However, even coaches who have fought or competed under these rules are incapable of fully preparing a student for a mixed fight where the combat can take place both standing and on the ground. An MMA coach who is a former Jiu-Jitsu competitor, for example, may be able to instruct his students to try to keep the fight on the ground, but they will not be able to explain first hand the frustration experienced when the opponent refuses to fight your fight and simply wants to back away to the standing position. A coach with actual MMA experience like the Hudson Valley’s Brian McLaughlin can explain to his students how they may need to be patient in such a situation, because it has in fact happened to him. Likewise, an MMA coach with experience will know that closing the distance against an experienced striker may be difficult or likewise, that keeping the fight standing against a good grappler may not always be possible, and that should the fight hit the ground they will need to have other options.

Beyond the strategic factors however, there are also the psychological ones that are even more difficult to grasp for someone who has never themselves fought. Prior to competing, any MMA fighter is bound to be nervous. Not only are they about to fight someone intent upon doing them bodily harm, but an audience is watching. There is going to be a great deal of noise in the arena that may be distracting. The lights may be bright to an abrasive extent and members of the audience may be inebriated or out right insulting to the fighters. A coach or corner man experienced in fighting himself will have specific coping strategies for his fighters when it comes to dealing with these aspects that a coach who has not fought will lack. For example, if the sight of the crowd becomes overwhelming, an MMA coach like the Hudson Valley’s own Brian McLaughlin may recommend that the student look for one individual in the audience who they are familiar with to make the image appear less threatening. This isn’t the sort of tactic any coach could recommend, its one only a former Hudson Valley MMA fighter would think of because he himself had to deal with it. Likewise, a former fighter will be able to explain to his students how to have a poker face while fighting, and how to hold oneself so that one’s own exhaustion or physical pain is less apparent to the opponent. He will also be able to explain how controlling one’s breathing while fighting is important so that they do not become too tense, how to drown out the sound of the audience by listening to one’s corner, or how to keep one’s eyes on the opponent to avoid other distractions.

Finally, former MMA competitors like Precision’s coach in the Hudson Valley can explain to their students first hand how to deal with different types of opponents and environments. For instance, if their student is about to fight a skilled wrestler who lacks a varied striking game, the MMA coach may be able to reference a particular fighter he faced with that resemblance and suggest his student try to land a standing blow before initiating an aggressive guard game. If his student is facing a pro boxer, the coach may be able to describe from personal reference how such a fighter might panic once being taken down and the sort of reaction they might be likely to have. MMA coaches like Brian McLaughlin from the Hudson Valley will also be able to explain to their students how fighting in a cage differs from fighting in a ring and how to prepare for each, because they have fought in both environments. They may also have strategic advice for fighting with rounds of different lengths, for example, they may suggest that a student competing with shorter rounds initiate aggressively early in the round, or they may suggest a student fighting with longer rounds play a more conservative game to prepare for the exhaustion of the later rounds. All these aspects and others too numerous to count can only be explained by an MMA coach with actual in-the-ring experience.

In the ever-growing sport of MMA new strategies are being developed each day and every school has its own strengths and weaknesses. As every member of a fight camp comes together they combine to form an overall body of knowledge, of which the strongest link is the head instructor. When the MMA instructor himself has fought professionally, like Precision’s coach in the Hudson Valley, there is less guesswork involved in fighter preparation and so the fighters will know more of what to expect when they step into the ring themselves.

Jamey Bazes is a lifelong martial artist holding a brown belt in both Tampa BJJ and Kenpo Karate.  He also holds a master’s degree from SUNY New Paltz.  He is a student of Precision Mixed Martial Arts in LaGrange, NY (near Poughkeepsie) and a decorated competitor including a Delaware Brazilian Jiu-Jitsu State Championship and a NAGA World Title.  to train with Jamey in Poughkeepsie NY check out Precision MMA http://www.poughkeepsiemixedmartialarts.com