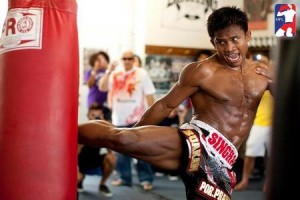 Of the different martial arts offered at Precision MMA in Poughkeepsie, New York, most have very specific boundaries in terms of the techniques they incorporate and the disciplines they encompass. For example, Brazilian Jiu-Jitsu, which is on the Precision syllabus, has very specific rules in tournaments and though it can incorporate other styles like wrestling or Judo, when you watch a BJJ match you usually have a good idea of the kinds of techniques you may expect to see. Likewise, boxing, also offered at Precision MMA, is very particular in it’s focus. No one has ever watched a boxing bout and wondered whether or not they were watching a Karate match, for example. However, the sport and martial art of Kickboxing has a much wider grey area in what spectators can expect to witness in terms of skill set, and what competitors can expect to learn when they sign up for classes. Though Muay Thai is, of course, a style of Kickboxing, and one which is offered at Precision MMA, it can have many differences from what one may witness at a local Kickboxing bout. Likewise, boxing is a part of Kickboxing, but has many differences from the latter as well. In this blog I will hope to clarify some of the arts encompassed under the umbrella of the term “Kickboxing”, some of the common rules of the sport, and how it is trained at Precision MMA in Poughkeepsie.

Kickboxing, as a sport and martial art, has many different styles. One of the more common styles, which is taught at Precision MMA by local Poughkeepsie AKBF Champion Karl Nemeth and others, is Muay Thai. The style of Muay Thai allow kicks to the leg, body and head without shin pads, as well as knees to all these targets, elbows to the head and body, and punches, as well as clinching and trips. No matter what the rules of a local kickboxing fight, practitioners of Muay Thai will be likely to find success. However, going into the event it is very important that they know the rules because many techniques that are legal in Muay Thai may or may not be legal in a local Kickboxing fight. For example, leg kicks are often illegal in kickboxing, or if allowed the competitors will often have to wear shin pads. Knees are often not allowed in Kickboxing competition, or if allowed, they may not be legal to the head. Trips may or may not be allowed in competition, and the amount of time fighters are allowed to spend in the clinch can vary. Finally, elbow strikes are very often illegal in Kickboxing events, while they are considered possibly the most lethal weapon in a Muay Thai bout.

Another common style of Kickboxing is the Dutch Style of Muay Thai, which is most notably represented in K-1 events. This style tends to combine the leg kicks, knees, clinching and elbows of Muay Thai, with the hand techniques, footwork and head movement of boxing, and the straight forward punching style and unique angular kicks of Kyokushin Karate. Precision MMA in Poughkeepsie, New York offers classes which cover techniques from both traditional Muay Thai as well as the Dutch Style and the common style of western boxing. Our instructors have been trained in all three styles and also freely exchange information with students who hold high ranks in arts such as Kenpo Karate, Shorin-Ryu Karate, Jeet Kune Do, and Takedwondo, in order to make sure that the kickboxing we offer, as opposed to other schools, is multi-faceted and never rigid. It is particularly important that we do this because some of our instructors and students who have had “kickboxing” fights in nearby Poughkeepsie have had to adapt to unusual rule sets, sometimes even mid-fight. For example, our instructor Karl Nemeth had one fight a few years back where he was told that kicks to the head were legal, and so he began landing them at will. However, it was then deemed that he was starting to do a bit too much damage with them, and the referee suddenly decided to make them illegal mid-fight. Though this kind of thing shouldn’t happen, because Kickboxing as a whole can have so many different rules and amateur fights are often more chaotic than professional ones, things like this do occur with more frequency than some might like to admit. There are both styles which allow and those which prohibit head kicks, and both are known as “kickboxing”, so a school like Precision in Poughkeepsie which is more versatile is likely to find more success in kickboxing matches with varied rules than some other schools. Because of our multi-faceted approach to the sport, coach Karl was able to have success in this fight even despite his head kicks being suddenly prohibited mid-fight, but for some other fighters from more rigid schools this sudden rule change might have led to defeat. Likewise, another one of our students had a recent Poughkeepsie Kickboxing fight where full body throws were legal and he did not become aware of this fact until his opponent utilized them in the fight. This is highly unusual. Some, in fact, many kickboxing fights do not allow trips or takedowns of any kind. Traditional Muay Thai Kickboxing does allow certain foot sweeps as well as takedowns which involve lifting an opponent directly off their feet and delivering them to the mat. However, even Muay Thai does not allow full body throws and slams done from unusual angles or which involve lacing the opponent’s legs. Nevertheless, because Precision MMA in Poughkeepsie also offers classes in Wrestling, Judo and Brazilian Jiu-Jitsu, which most of our kickboxers cross train in, the student in question was quickly able to get his bearings about him and use his knowledge of these arts to defend against the takedowns and win the fight. Once again, it was shown in this example that “kickboxing” as a sport can include any number of different rules, and that the more versatile one’s school is and the more multi-faceted their kickboxing program, the greater chance its students will find success in competition.

One very popular style of kickboxing, which is often the basis for the rule sets of local events, is the American style. This sport came into popularity in the 1970s with fighters such as Chuck Norris, Joe Lewis and Bill “Superfoot” Wallace. The rules generally prohibit leg kicks, knees, elbows, or any sort of trips or takedowns and also disallow lengthy periods of clinching. Basically, the American style is more similar to boxing mixed with Kyokushin Karate than it is to traditional Muay Thai from Thailand. Though Precision in Poughkeepsie does offer traditional Muay Thai techniques which coach Karl Nemeth has learned from none other than world Muay Thai champion Kaensak Sor Ploenjit, we are fully capable of competing under the American rules. This is because we also incorporate so much boxing into our style, which our students learn from experienced boxing coaches, such as Derrick Ohlhoff, who is himself a three times Golden Gloves’ champion. When far fewer kicks are allowed, and knees and elbows are prohibited, then sharp boxing skills are that much more important in attaining victory. Most of our sport kickboxers cross train in boxing so that they can have success in bouts which have American rules, but this is unfortunately not possible for those martial artists at other more rigid schools which do not offer Boxing classes. Our school also has students who hold brown and black belts in styles of Karate like Kenpo and Shorin-Ryu, so if a student knows he is going to be competing under American rules he can cross train with them in order to gain a wider knowledge of upper body kicks in preparation.

Another area of Kickboxing which is very subject to change is the length and number of rounds. In some local kickboxing events the rounds have been known to be as short as one minute or one minute and fifteen seconds. Other times the rounds may be a minute and a half, two minutes, three minutes, or even five minutes. Though most local kickboxing fights these days tend to be three rounds, there are cases where they are only two rounds, and there are also cases where a fight can consist of a total of five or even ten or more rounds. This wide variation in length and number of rounds can make preparation for an upcoming Poughkeepsie Kickboxing fight stressful and chaotic. However, because our instructors and students have competed in fights with so many differing round lengths and numbers of rounds, our students can properly prepare for any scenario. If the rounds are only one minute in length then our instructors will know how to train them, both psychologically and physically, for the short bursts of energy they will need to expend. However, if the rounds are longer, or there are more of them, then our coaches will also know how to prepare our competitors so they will have the necessary cardio and mental endurance to make it through wars of attrition.

As can be seen, “kickboxing”, as both a sport and martial art, has many rule sets and many changing variables. To be prepared for these a martial artist needs a wide array of skills and first hand instruction from trainers who have fought under different scenarios themselves. Whether fighting under Muay Thai rules, Dutch or American Kickboxing rules, or some other variant, students of Precision MMA in Poughkeepsie, New York will be prepared to take home the gold. This is because we train under so many different conditions that if need be, we will simply beat you at your own game.

Precision MMA is currently offering a 30-Day FREE trial for new members.  If you’re interested in learning self-defense, getting into shape, and training with the best in the area, then stop in at 1097 Route 55, Lagrangeville, NY or call us at 845-392-8495.  Don’t forget to ask about our free trial and intro lesson!

Jamey Bazes is a lifelong martial artist holding a brown belt in both Brazilian Jiu-Jitsu and Kenpo Karate.  He also holds a master’s degree from SUNY New Paltz.  He is a student of Precision Mixed Martial Arts in LaGrange, NY (near Poughkeepsie) and a decorated competitor including a Delaware Brazilian Jiu-Jitsu State Championship and a NAGA World Title.  To train with Jamey in Poughkeepsie NY check out Precision MMA http://www.poughkeepsiemuaythai.com