It has been a busy couple of weeks for the Mixed Martial Arts fighters out of Precision MMA.

First we had Alec Hooben returning to action against tough veteran Jordan Mitchell.  Hooben jumped up a weight class to take on his heavyweight opponent after a string of other fighters backed out.  Despite battling a nasty head cold and a 40 pound weight disadvantage Hooben was able to secure the unanimous decision victory after scoring numerous takedowns and ground and pound.

Next up was Sean “Shorty-Rock” Santella.  Sean is coach Brian’s protege and has his sights set on the UFC.  At CFFC ion Philadelphia, Pennsylvania Sean earned his 15th professional victory and extended his winning streak.  Sean was dominant throughout the bout landing spinning back fists, high kicks, and dominated his BJJ Black Belt opponent on the ground securing numerous close submissions.

Next up is Precision Muay Thai coach Karl “Mr. Fantastic” Nemeth as he defends his 145 Kaged Kombat MMA Title in Saratoga, NY.  His opponent TJ George is curently the #2 ranked fighter in the state and riding a 7 fight winning streak.  With a victory, coach Karl will cement his place as the top fighter in the region. 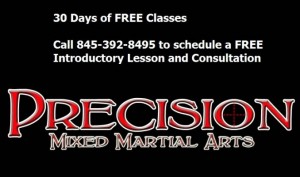 If you live in Poughkeepsie, LaGrange or anywhere within the Hudson Valley and would like to train like a fighter call Precision MMA at 845-392-84954 or visit http://www.bjjfighter.com and get started on your 30 day free trial