This weekend Precision Mixed Martial Arts head coach Brian McLaughlin made the journey to Las Vegas to corner his student Jim Miller in his UFC 200 bout against Takanori Gomi.  The former Pride and Shooto champion, Gomi is widely regarded as one of the best lightweight fighters of all time.  Jim was in a must win situation against a very dangerous opponent, but rose to the occasion in dramatic fashion.

Jim followed the game plan perfectly and showed off his world class Brazilian Jiu-jitsu taking the back and quickly scoring a crowd pleasing TKO stoppage victory.  This victory made Jim the first fighter in UFC history to earn victories at both UFC 100 and UFC 200!

Do you dream of fighting in the UFC?  Precision MMA near Poughkeepsie, NY can help make your dreams a reality. Call 845-392-8495 or visit http://www.poughkeepsiemixedmartialarts.com to get started!

Going into this fight Karl was considered the heavy underdog.  His opponent TJ George was 8-1 and was riding a 7 fight winning streak winning all his fights by stoppage. According to the official MMA rankings George was the #2 fighter in the entire state, while Karl was barely on the radar.

However, the students at Precision MMA knew more than the odds makers and were all very confident Karl would put his black belt skills on display.

When the fight began George marched forward and executed a single leg takedown.  From there Karl immediately transitioned to his rubber guard and began a rapid fire series of submissions.  George attempted to counter with a knee bar attempt of his own, not realizing leg locks are coach Karl’s specialty.  Karl countered the knee bar and transitioned into a beautiful calf crush resulting in an immediate submission just minutes into the very first round.

Calf crush submissions are extremely rare in mixed martial arts since they require such a high degree of skill to implement, this is Karl’s second consecutive victory using the esoteric submission.

Train with the only MMA Champions in the Poughkeepsie area Free for 30 days call 845-392-8495 or visit http://www.poughkeepsiemixedmartialarts.com to get started

On April 20th from 11am-1pm UFC and WEC veteran Javier “Showtime” Vazquez will be at Precision MMA for a no-gi seminar covering attacks for Brazilian Jiu-Jitsu.  Javier is one of the country’s top instructors, don’t miss your chance to train with the best! 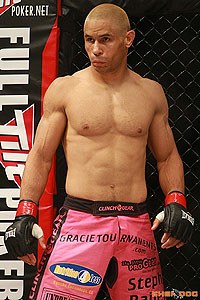