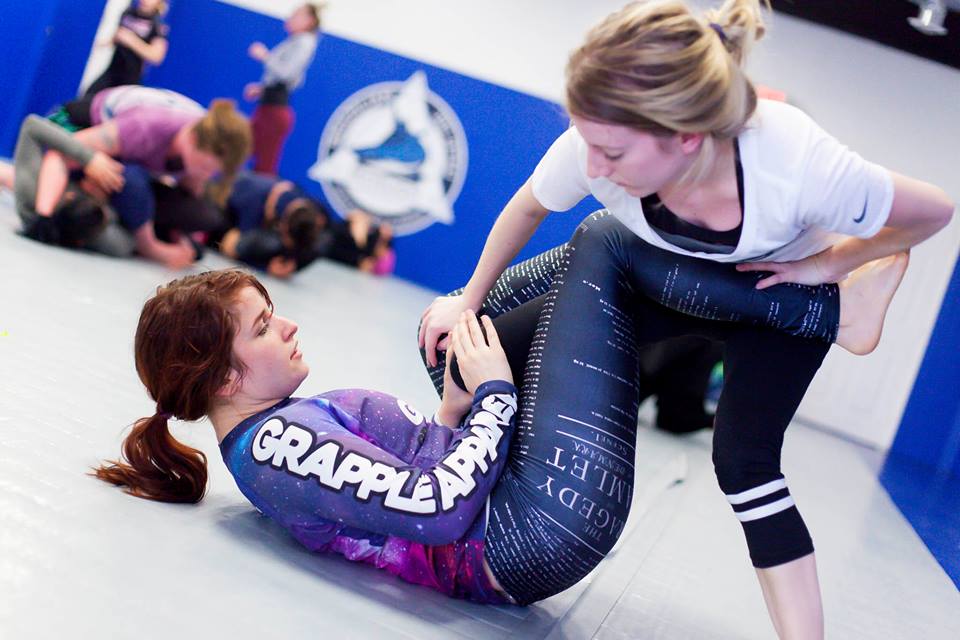 Women are no strangers to violence. It’s not rare that we hear of women being victimized in modern society. The statistics of women experiencing sexual or physical violence are scary and a true realization that women aren’t being encouraged to be properly taught how to defend themselves in  assault situations. While abuse may happen to anyone, women are by far the more frequent victims. This is the optimal reason why instead of participating in spin class to get better at riding a bicycle women should view learning how to protect themselves as a priority. Women shouldn’t rely solely on male figures, groups or weapons to defend themselves, they should be mentally and physically prepared to defend against attackers if need be at any moment. Men are often viewed as stronger and bigger, which may often be the case in most confrontations, but knowing how to use your opponent’s mechanics against them is key to surviving and protecting yourself in any situation. Brazilian Jiu Jitsu or BJJ is a martial art that teaches smaller individuals how to use bigger opponent’s height, weight and movement to their advantage. This sport enables women to fight off attackers of any size and allows them to build confidence, an essential key to gaining advantage in violent engagements. Women don’t have to feel helpless in attacks or fall victim to physical and sexual abuse, with the proper instruction and environment, women can be given the tools to defend themselves. At Precision Boxing and MMA, we offer various disciplines that teach self-defense, satisfying multiple ambitions of our practitioners. Our BJJ classes are taught by  knowledgeable instructors of the sport in an accepting, controlled environment. BJJ teaches individuals how to be comfortable in uncomfortable situations by empowering students with knowledge and various techniques to safely defuse any situation. If you’re interested in learning a sport that’ll teach you self-defense and promote confidence Call 845.392.8495 or visit http://www.precisionmixedmartialarts.com

People seek martial arts training for various reasons whether it is for fitness, competition, or fun there is one circumstance that trumps them all, self defense. Having the ability to protects yourself and others in any given situation is a powerful tool that can help you sleep a little sounder. Many gyms promise these results with no avail. Here at Precision MMA not only are we taught by the best instructors in the Poughkeepsie area,  but also have reviews by real life people using their skills to defend themselves in the street.

Here is one review by KC Edenhofer, who by day is a SUNY NewPaltz R.D. and by night is a Security guard. Not long into his training at Precision MMA did KC use the skills he learned to end a fight that had occurred while on duty.

“I’ve been at Precision for two months and also work security back home. During one of my security jobs a person became irate and was ejected from the venue. When verbal de-escalation did not work, the person attacked me. Using the skills I learned here I was able to take him down safely while making sure no one else was in immediate harm. For the people that are on the fence about joining, jump over the fence and join us because it’s definitely the place to be!”

You could be our next rave review! If you want the skills to defend yourself check out 30 FREE days of self defense classes call 845-392-8495 or visit http://www.poughkeepsiemixedmartialarts.com

What is your safety worth to you?  The answer to that question should be everything.  Your health, or in more severe cases your life, is one of the most precious, fragile and eminently perishable assets you have.  Getting injured or hospitalized in any way is an event that can radically alter your life, leaving you crippled and in pain where health and vitality used to be.  In a moment of senseless violence your life could become appreciably worse.  It may seem like hyperbole, but getting into a violent altercation is not something you have to inflate to make it into something scary.  There are costs that come along with learning self defense.  The martial arts come with membership dues, buying equipment and the time it takes to properly learn them.  These costs are insignificant when they are weighed against the dangers of inaction.

Nick Formichelli is a Corrections Officer who recently was called into action to stop a potentially serious situation.  Nick is on a response team that is called in to assist if an inmate attacks an officer.  Nick has previously trained in Boxing and that had been his typical approach to altercations.  When he came upon the inmate and officer involved in this fight, they were on the ground wrestling for top position.  The inmate attempted to grab Nick’s legs and take him down as well.  To the inmate’s surprise he found out that Nick had been practicing the sprawl the previous day at Precision.  Nick kicked back his own legs to prevent the take-down and put his weight down on the inmate.  This move was efficient and quick and stopped the inmate from doing any further harm.  Nick was able to resolve the situation with minimal harm to all involved.  He stopped an violent altercation with a quick and precise response.

Nick has been a Corrections Officer for twenty years.  He had been a Precision MMA student for just 30 days.  He learned enough to keep stop an inmate from hurting anyone in thirty days.  Watch the video below to hear in his own words what happened.  If you want to learn real world self defense then come in to Precision MMA today.  Stop in, give us a call at 845-392-8495 or go to our website at www.poughkeepsiemixedmartialarts.com.

Precision MMA Student uses his Techniques to Stop an Attack

My name is Joe Bottiglieri, and I turned 40 this past August. I am a husband, father to three daughters and a Marine Corps Veteran. I started training near Poughkeepsie, NY under Brian McLaughlin at Precision MMA. I am currently ranked a one-stripe Blue Belt in Brazilian Jiu-Jitsu. The impact BJJ has had on my life has been nothing short of extraordinary and extremely positive. 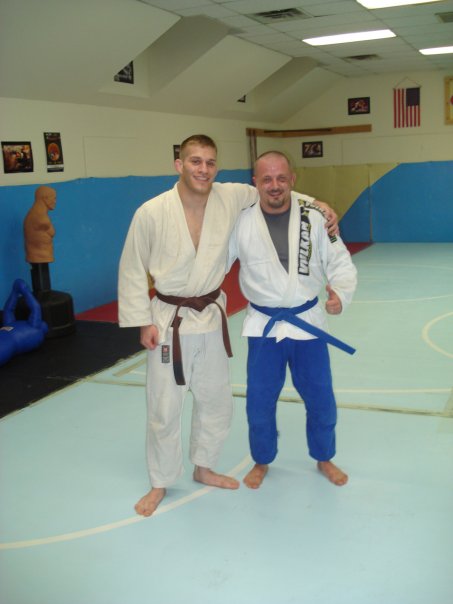 While driving home from Poughkeepsie a few weeks ago, I stopped at a gas station to get something to drink. As I was walking in, I noticed two groups of people speaking to each other in what could only be described as a highly agitated manner. As I was leaving the store, the situation had escalated to a violent state. Someone had taken a swing at a female over an insult resulted in two guys from one group physically assaulting a single guy from the other. They wrestled him to the ground and crouched over him, punching and kicking him wildly. While the individual was on the ground, he was screaming at his friends for help – but nobody was doing anything.
I make it a point to avoid this type of violence unless absolutely necessary and in this case, I felt it was appropriate to get involved. I dropped my stuff and started telling the individuals to get off of him, which they did not do. I got closer and struck the attacker facing me in the side of his head with an open palm, to avoid doing any serious damage to his nose, eyes or face. He stood up a bit and looked at me. In an aggressive tone, I told him to get off of him. This seemed to register and he stopped. The other attacker had his back to me and was still punching the victim. When I tried pulling him off he didn‘t budge. I slid my left arm around his neck and over the bicep of my right arm and started cinching up a rear-naked choke, while telling him that was enough. I was worried that the other attacker might try to sucker-punch me at this point but he wasn‘t budging. I kept tightening the choke on him until he stopped punching. At that point I slid him back a little bit and released the choke. He landed on his butt and scrambled to his feet. I could easily have put him to sleep but applying the choke with control until he stopped was more than effective. I don‘t think he wanted to find out how much tighter I could have made it.
I was prepared to defend myself if need be and to be honest – I was really worried that one of them might have a knife or a gun, but that wasn‘t the case. Realizing the police might arrive the attackers quickly ran towards their car. The victim on the ground was back on his feet at this point and started after the attackers. His friends and I held him back and advised him to get their license plate number along with the make and model of their car.

While I wish things like this wouldn‘t happen, I‘ve been around long enough to know that they will and usually when you least expect it. If there‘s a positive in any of this, it‘s that nobody was seriously injured and I was able to remain relatively calm and apply fundamental BJJ in a real-life situation. As a result I prevented several people from receiving injuries far worse than a few bruises and scrapes. Applying the techniques on the attacker was no different than live grappling in class at Precision MMA because we always train realistically with fully-resisting opponents. Without my martial arts training, I might have used more force to stop the assault and as a result, caused more injury to either of the individuals involved, which could have escalated the level of violence.

Joe used his Poughkeepsie martial arts training to keep those around him safe.  If you’d like to learn martial arts in Poughkeepsie, NY check out Precision MMA FREE for 30 Days call 845-392-8495 or visit http://www.poughkeepsiemixedmartialarts.com