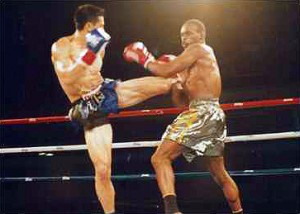 Without a doubt the most popular striking art practiced by mixed martial artists these days, such as those who train at Precision MMA in Dutchess County, New York, is Muay Thai Kickboxing.  Dating back to seventeenth century Thailand, this style has proven to have lethal effectiveness on both the battlefield and in the sport arena.  However, its uses are not confined to sportive competition or militaristic use by ancient Thai and Siamese armies.  This multi-faceted form of combat is extremely effective for civilian self-defense scenarios.  Additionally, Muay Thai workouts are excellent for getting into peak physical condition and form the basis for many cardio kickboxing programs across the country.  Precision MMA in Dutchess County, New York is one gym which offers a Muay Thai program capable of getting anyone into shape in record time as well as providing effective skills for use in practical street self-defense.

Muay Thai Kickboxing, as it is taught at Precision MMA in Dutchess county New York, is one of the most effective styles in the world for self-defense.  This is because the art has such a wide repertoire of strikes, trips and clinch tactics, as well as specific defenses to all these attacks.  Muay Thai could best be described as a form of striking which combines the punches of western boxing, with it’s own unique brand of kicks, generally delivered with the shin, as well as elbow and knee strikes.  Students are taught to strike with multiple different surfaces, such as the shin, ball of the foot and heel for kicks, the front and back of the knuckles for punches, the points and sides of the knees for knee strikes, and the points and sides of the elbows, as well as the forearms, for elbow strikes.  Likewise, Muay Thai teaches the student to condition various parts of their bodies, such as the shins and forearms, in order to be better able to defend against strikes.  Muay Thai Kickboxing practitioners are also taught to strike from a number of different angles.  With their hands they are taught the conventional jab, cross, hook and uppercut from western boxing, but other more unconventional techniques are also taught such as spinning back fists and superman punches.  All forms of kicks are employed, such as roundhouses, front push kicks referred to as “teeps”, and any number of different flying and spinning kicks.  Muay Thai is perhaps most known for its knee and elbows strikes which are particularly useful for self defense because most attackers would probably not see them coming as easily as a typical overhand right or a jab.  A mugger or assailant would be more likely to expect a would-be victim to throw a punch rather than a spinning elbow or flying knee.  Local AKBG kickboxing champion Karl Nemeth teaches techniques such as these in great detail at Precision MMA in Dutchess, County, New York.  Karl is a student of none other than world renowned Muay Thai champion Kaensak Sor Ploenjit, so his students get their knowledge of the style straight from its source.

Not only does Muay Thai employ a vast arsenal of strikes, it also teaches very specific clinch tactics which make the art even more useful for self defense because stand-up grappling scenarios are very common during assaults.  One cannot expect a violent encounter to take place at one specific range.  An attacker is not going to politely stand at kicking distance and then move slowly and gradually into punching range, for example, in order to give the victim time to throw the perfect strike.  Instead, the assailant might simply rush the victim and initiate a standing clinch.  Muay Thai, as it is taught at Precision MMA in Dutchess County, has all the answers for such an attack.  For example, one of Muay Thai’s defensive tactics for a standing bear-hug would involve pushing the attacker’s chin upwards with one’s palms in order to break the grip, then grabbing the back of the attacker’s head in what is known as the “thai plum”, and driving one’s knee into the attackers’ face.  This would be a very common scenario one might encounter in a violent attack.  Likewise, a mugger might attack with a standing headlock, and from such a position the typical kicks and punches taught in many striking styles might not be effective because of the close proximity.  However, for such a situation Muay Thai’s knee and elbow strikes would work perfectly because distance is not necessary to achieve forceful impact.  Muay Thai also employs a number of standing trips, takedowns and leg sweeps, which could be very useful in a street altercation.  Many striking styles do not teach these tactics, but Muay Thai as it is taught at Precision MMA in Dutchess County, includes a number of foot sweeps and throws common to the style as it is practiced in its homeland.  While in the ring these takedowns are not likely to end a fight due to the soft surface of the canvas, one good sweep on a concrete or otherwise hard surface could end an attack altogether.  A person trained in the art of Thai boxing might find themselves in a situation where these tactics could be the most effective recourse, and unlike students of other more rigid striking styles they would know how to use these techniques to defend themselves.

Finally, the leg kick, as it is taught in Muay Thai, might be the most effective self-defense maneuver for a number of reasons.  First, a mugger or violent attacker is not as aware as a martial artist of the multiple different parts of their body which may be open to strikes.  The typical street fight is likely to include punches to the head and perhaps to the body, but will probably not include strikes to the legs.  For this reason, attacks below the belt are less expected, and therefore, more likely to land.  A well placed leg kick to the inner or outer thigh for example, as it is taught to be delivered with the shin bone in Muay Thai, is extremely painful, can be delivered very quickly, and can in itself be a fight ending blow.  Unlike a professional kickboxer, the typical mugger has not conditioned his legs to take the impact of a Thai kick.  As such, one well-placed leg kick could actually break an assailants’ leg, tear his ACL, or at the very least significantly slow his movement.  This is key, because unlike in a kickboxing match, retreat is an actual option.  In fact, it is probably the best one.  Strikes to the head or body will not prevent an attacker from chasing one, but a kick to the leg will.  If the assailant’s ability to run has been hindered, then his chances of harming the victim are greatly lessened.  And finally, street fights have very real legal repercussions.  A hard blow to the head could break a person’s jaw or nose, give them a concussion, or even cause brain damage or death in a worst case scenario.  Even if it was a clear-cut case of self-defense, this could be difficult to prove if the victim is brought to trial for jeopardizing the life of the attacker.  However, a leg kick is not a life-threatening blow and so it would be more difficult to prove that the defender had lethal intent should the altercation lead to the courtroom.

Not only is Muay Thai the first choice amongst many martial artists when it comes to self-defense, its workouts are second to none as far as conditioning is concerned.  Unlike weight lifting or running, which by themselves produce muscular or cardiovascular strength, Muay Thai workouts produce both.  Muay Thai padwork is intense and the rapid-fire punches, kicks, knees and elbows thrown by the student will increase both their muscular endurance as well as their anaerobic stamina.  The high volume strikes which Muay Thai students perform at schools like Precision MMA in Dutchess County, New York, will help them to develop lean muscle mass akin to that obtained by low weight, high repetition weight lifting.  Students will find themselves burning large amounts of calories and losing fat, while at the same time becoming stronger without becoming muscle bound and losing flexibility, which heavy weight lifting tends to cause.  As such, Muay Thai students will become faster and gain greater endurance while simultaneously becoming physically stronger.  This is not only due to the strikes which Muay Thai students throw, but also because this style traditionally employs a great deal of body weight exercises such as pushups and sit ups, as well as a good deal of jumping rope.  All of the body’s muscle groups are incorporated, and students like those at Dutchess County’s Precision MMA will notice the physical changes as their abs and core become tighter and leaner and the muscles in their legs, arms, shoulders and back become more pronounced.  The many jumping movements taught in Muay Thai will engage the calve muscles and any number of punches and upper body strikes will engage the triceps, biceps, deltoids and other muscle groups.  Students are also taught to take shots to the body, which has benefits in both self-defense and fitness.  At the end of many workouts, training partners will lightly punch each other’s abdomens as the other clenches their abdominals.  Over time, this creates stronger core muscles capable of taking greater impact and which will also look good come beach season.  Dutchess counties’ Muay Thai students also gain flexibility in their classes as stretching is heavily incorporated so that they will be capable of landing head kicks with ease, and if they are interested in getting in the ring they will also spend time conditioning their shins to be able to build up calcium deposits, enabling them to take leg kicks without being incapacitated.  The end result is that by combining their workouts with a clean diet, Muay Thai students like those who train at Dutchess counties’ Precision, will eventually be lean and toned, with a low body fat percentage, lower blood pressure and more anaerobic endurance, as well as having greater strength and flexibility.

Subsequently, training in Muay Thai at Precision MMA in Dutchess county, New York, will get students into excellent shape in record time, while also giving them the tools to protect themselves from violent attack.  The art can entirely transform a person inside and out, making them more physically healthy and more confident as well knowing that they are armed at all times with an efficient tool for self preservation.

Come by Precision MMA for 30 free days and try out our Muay Thai program and you will be able to see this transformation in yourself!

Jamey Bazes is a lifelong martial artist holding a brown belt in both Brazilian Jiu-Jitsu and Kenpo Karate.  He also holds a master’s degree from SUNY New Paltz.  He is a student of Precision Mixed Martial Arts in LaGrange, NY (near Poughkeepsie) and a decorated competitor including a Delaware Brazilian Jiu-Jitsu State Championship and a NAGA World Title.  To train with Jamey in Poughkeepsie NY check out Precision MMA http://www.poughkeepsiemuaythai.com