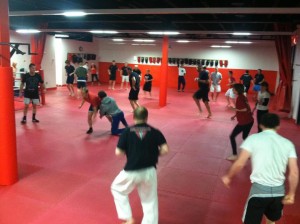 In the growing world of combat sports and mixed martial arts, not all boxing gyms are created equal.  To a large extent, there are two main audiences for a modern day boxing gym, and schools often tend to fall too far to one of the opposite extremes.  On the one hand, you have the growing trend of boxercise and cardio boxing gyms, which focus on getting people in shape through traditional boxing workouts.  These mainly cater to men, women and children who are not overly serious about competitive boxing or self -defense, but who simply want a friendly environment in which to train.  While they do tend to be more inviting than your more serious inner city gyms, what they lack is the hard sparring and practical focus, which create tough minded and able-bodied competitive boxers.   On the other hand, there are the more traditional boxing gyms which, though at their best are capable of producing skilled competitive boxers, often drive the more casual trainees away with their overly strict “urban discipline” and “tough love” mentality.  Precision Mixed Martial Arts, located in Lagrange, New York, near the town of Poughkeepsie in the Hudson Valley area, offers the perfect harmony of both aspects, providing both a friendly environment as well as a disciplined and practical approach to sport fighting and street self-defense.

Boxing is a more than two centuries’ old art, and so in some senses the sport itself, including it’s trainers, trainees and gyms, has become quite set in it’s ways.  Anyone who has watched the movie Rocky with Sylvester Stallone has seen the image of the traditional inner city boxing gym.  While in many cases film does not reflect reality, in this case the environment portrayed is often not far from the truth.  Boxing is a tough sport, and so many gyms are located in equally rough neighborhoods and frequented by fighters and trainees who are not interested in providing an inviting environment.  In fact, many of these gyms often “haze” the newcomers, throwing them in the ring with more experienced boxers to see if they have the toughness to take the hits and come back for a second training session.  While in some cases this might bring in a couple disciplined new boxers, more often than not it tends to drive away the casuals, or even those who are not so casual in their training but simply don’t want to deal with a “thug” mentality while training.  If the prospective student does stick around, he may still be pushed to the side and ignored by the head trainers in favor of the boxers who have been there longer and may be considered to be a “second rate” trainee, and he will have a harder time improving because of less focus given to him by the coaches.  The fact that many of these gyms are located in poor or violent neighborhoods further isolates many prospective students who feel threatened even going into the area itself to try out a boxing class.  Precision Mixed Martial Arts in the Hudson Valley offers serious training for those interested in competing or acquiring skills for street self-defense, yet it is located in an upscale area and has a welcoming environment, and so it does not isolate those serious aspiring boxers who are turned off by the traditional “boxing-gym atmosphere”.  When a new student takes his or her first class at our gym, they will not immediately be made to feel as if they must “prove their toughness” against experienced boxers.  Nor will they be made to feel as if the trainers have less time to devote to them than the more senior students.  One-on- one coaching is always provided to students of all levels and our coaches are always friendly and supportive.  Students will also not be pressured to fight competitively, something which is often done at traditional gyms, though if this is their focus we certainly provide the training necessary to accommodate that goal.  Our head boxing instructor, Derrick Ohlhoff, is himself a three-times Golden Gloves’ boxing champion with an impressive amateur record who is patient with all students and has a very good-natured attitude.  Our other coaches, Jon Russo and Jon Joy, both have many years of experience in the local Hudson Valley boxing circuits and have tested their skills many times in the ring, and are equally affable and approachable.  Precision Mixed Martial Arts welcomes those students who might be made to feel “second-rate” at a traditional gym.  In fact, the loss of the “conventional” gyms becomes our gain as we often end up producing great competitors out of those who started off as casual students simply attracted by the open-minded and sportive environment of our school.

The other type of boxing gym which has become very popular these days is the “boxercise” gym, or “cardio boxing” gym where boxing-oriented workouts are provided with the intention of getting students into shape by utilizing boxing style workouts.  While these programs do often get trainees into great shape physically, they do not teach students how to fight competitively or to defend themselves.  This is the case both because sparring is not heavily stressed, or even offered at all, and because proper boxing technique is often not emphasized because it is not nearly so important.  When preparing for an encounter in the ring, or a self-defense scenario, proper technique is paramount because without it one cannot achieve the maximum amount of power in their punches.  However, having flawless technique is not necessary when one is only hitting a heavy bag or some mitts with no intention of getting in the ring or needing those skills for self-defense, because they will still be burning calories regardless.  The sorts of cardio boxing gyms that are often offered at one’s local gym or exercise facility take advantage of the fact that their students do not realize they are being offered an inferior product.  They realize that most students looking to get in shape will not realize the difference between a properly executed punch and a sloppy one, and so they often employ instructors who lack any real credentials to teach boxing.  While Precision Mixed Martial Arts in the Hudson Valley does offer boxing circuit training classes, as well as beginner and advanced boxing classes which can get students in excellent shape, we do not sacrifice proper technical instruction.  While students are burning fat and gaining muscle and cardio vascular endurance they will also be learning how to get full power behind their punches and how to utilize proper footwork and head movement.

Furthermore, the fashionable boxercise gyms which have been popping up left and right do not usually provide sparring classes, and without sparring a student can never learn to box competitively or defend themselves against an attack.  Precision Mixed Martial Arts in the Hudson Valley has several sparring classes a week, open to the more advanced students, so that they can learn to put their skills to the test if need be.  Our sixteen by sixteen foot ring is perfect for training our students for upcoming fights in the Hudson Valley region, and we have a very successful competition record amongst our students.  In fact, despite the fact that we do not have the “traditional boxing gym atmosphere”, one of our students is none other than Professional HW boxer Zuri Lawrence, who was at one point ranked as high as #12 world wide, and was a former sparring partner for Evander Holyfield.  Clearly, the attitude displayed by many urban gyms has not been necessary for Precision to attract big names, and we continue to rack up the local victories as our name spreads throughout the Hudson Valley.

Moreover, because Precision MMA is a true Mixed Martial Arts gym and not only a boxing gym, we have been able to break out of the mold that many traditional gyms have become slave to.  Not only have students used our boxing program to acquire skills for boxing competition, they have also used these skills to successfully win Amateur Kickboxing and Muay Thai fights, as well both Amateur and Pro Mixed Martial Arts fights.  Our boxing program is also more self-defense oriented than your average gym and one of our instructors Jon Russo is also quite skilled at Jeet Kune Do and is adept at explaining how boxing can also be used for self-defense as well as competition.  All these aspects of boxing are overlooked by the traditional inner city gyms which rigidly stick to their formula and drive away anyone interested in learning to box for any reason other than to compete in a pure boxing match.

To conclude, anyone interested in learning to box for any reason, be it self- defense, sport competition in boxing, kickboxing or MMA, or even simply for fitness, can benefit from the boxing programs offered by Precision Mixed Martial Arts in the Hudson Valley.  Because we are located in a nice area and provide approachable instructors we are highly sought after by those who want to learn to box without having to deal with the intimidation factor which so many gyms unfortunately foster.  At the same time we avoid following the common path of the “aerobic boxing gyms” which only churn out physically fit students who have no idea how to use their skills in a practical situation.  Come check out Precision MMA’s boxing program for 30 free days and see if it is right for you.

Precision MMA is the choice of UFC fighters, golden gloves champions and Brazilian Jiu-Jitsu medalists – a true mixed martial arts gym that combines diversity with specialization.  Check them out for 30 days FREE call 845-392-8495 or visit http://www.poughkeepsiemixedmartialarts.com

Jamey Bazes is a lifelong martial artist holding a brown belt in both Brazilian Jiu-Jitsu and Kenpo Karate.  He also holds a master’s degree from SUNY New Paltz.  He is a student of Precision Mixed Martial Arts in LaGrange, NY (near Poughkeepsie) and a decorated competitor including a Delaware Brazilian Jiu-Jitsu State Championship and a NAGA World Title.  To train with Jamey in Poughkeepsie NY check out Precision MMA http://www.poughkeepsiemixedmartialarts.com