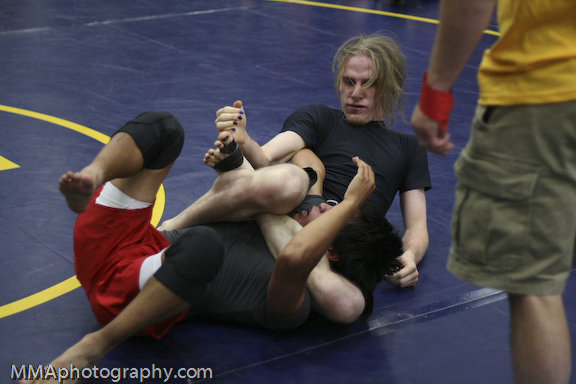 Looks can be deceiving, when one sees someone just shy of 6 feet weighing 140 pounds soaking wet they typically aren’t intimidated; especially when he has a pony tail and bears a striking resemblance to the lead singer of Alice in Chains.

Karl is an exception to the rule.  In the competitive martial arts world of chest thumping machismo he maintains a quiet demeanor and unassuming presence.  Opponents and spectators alike take one look at him and think; this kid is going to get killed.  What they don’t realize is that underestimation is the ace up his sleeve.

In the bustling metropolis that is Wilmington Delaware Karl’s skills would once again be on display.  He was grappling for the right to be best in the Diamond State – it may not impress women at the watering hole, but in the BJJ world it earns you some legit street cred.

After dismantling his first few foes Karl was facing a tall task against a very skilled John Malkovitch lookalike with a lethal open guard.  The two traded sweeps and takedowns with Karl’s opponent eventually progressing from side control to mount.  For a moment it looked as if we would have to settle for the silver medal, however Karl quickly recovered his guard and began rattling off submission attempts like machine gun set to full auto.  A dizzing scramble of omoplatas, sweeps and back takes ended with a locked in mata leao (the more popular nomenclature is “rear naked choke” but this is a family blog).

Under normal circumstances, when someone locks in a choke and shuts off the blood supply to the brain people admit defeat, tap out and hope their girlfriend didn’t just see that. However, when plastic trophies are on the line people do some crazy things. Karl’s opponent is up on points and he’s NOT going to tap.  From the sidelines my coaching has been reduced to yelling “SQUEEZE!” at ear piercing disciples about 30 or so times.  As instructed Karl gives an extra dose of elbow grease and chokes him opponent unconscious.  While obviously, not the smartest strategy, part of me admired his opponent’s stubbornness.  After his coach administered a mildly awkward back massage he awoke and looked up at the referee and asked, “Did I win?”

Reflecting on the events that just transpired our erudite camera man summed up the events beautifully.  In his best Steve Carell voice “Karl…puts people to sleep”