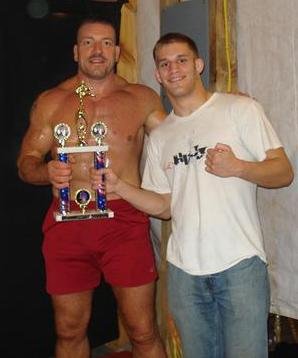 I’m sorry Sir, but these seats are reserved for The Hell’s Angels…

To be fair they weren’t seats, but pick nick tables. Ordinarily I believe fighters should have preferred seating, but in this instance I was willing to look elsewhere.

I was unfamiliar with the social mores of biker rallies, I was going to have to learn as I went.  We weren’t here for the Harleys, we came for a fight.  This was a unique situation as pugilism goes. A bit different than the Hudson Valley MMA scene.  We were far from the glitz and glamor of Las Vegas or Atlantic City.  We were at the black thorn biker ralley in the far reaches of upstate New York. The Empire state hadn’t sanctioned MMA yet, so the legality of these bouts was far from certain.

The fight promoter was a minister; bouts were contested in a pro wrestling ring outside in the pouring rain. In addition to the rules of the bout, fighters were given specific procedures and instructions to follow in the event of a biker riot.

On paper some would say we were an underdog.  Our fighter was not your typical Hudson Valley MMA prospect – a 46 years old chiropractor father of two.  He divided his time at the gym with little league games and parent teacher nights.  The opponent was a 21 year old war tested Marine.  However, fights are not contested on paper and despite being only a few years shy of AARP benefits “Big John” was 245 pounds of granite and steel.  He was a salt of the Earth type who liked big game hunting and rodeo competitions.  He had lethal submissions, but in reality he could make most men tap with a firm handshake.

After wading through a small river of mud we made our way to the ring where I heard a familiar shrill of support instructing Big John to “break his femur” customary pre-fight advice from my student Cliff.  Our opponent was riding high with confidence off the cheers of support from the soldiers in the crowd, but once he locked eyes with John I could tell part of him wished he was somewhere else.

The fight started off with a big right hand, quick double leg and lightning fast Kimura – in just over 90 seconds we earned a submission.  The ref halted the bout, but much like Chael Sonnen at UFC 117 didn’t realize that a tap ended the bout. Infuriated Big John stares down his opponent and says, “No Bullsh*t, you know you tapped” – his opponent, realizing that a rematch wasn’t going to end much better for him, reluctantly nodded his head and accepted defeat. We had our victory and I logged one more story for the grand kids.

So where did Big John learn his incredible MMA skills?  At the best Hudson Valley MMA school – Precision MMA in LAGrange, NY